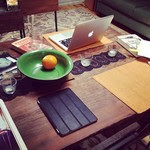 Things have been a little nutty around here lately. The recycling bin is overflowing, our kitchen/dining room/desk table is a hodgepodge of to-do lists, exam reading and bills to pay. To make matters worse, sweet Pico impaled his mouth on a stick last night in the park, and has been down for the count ever since. With a move on the horizon, new projects ramping up, exams to study for and wedding to prepare for, crazy has become the new normal. Chris and I have barely had time to fit in the repeat runs to Home Depot and the plumbing store, so you can imagine what’s happened to our rhythm of cooking and eating together at home.

In two days, we leave for a week of vacation on North Carolina’s Outer Banks with Chris’s family (my soon to be niece and parents-, sister- and brother-in law ), where I imagine we’ll be spending quite a lot of time cooking big, if simple meals for us all to share. But until then, it’s leftovers and trail mix from the glovebox as we run around checking things off the to-do list.

But even when things are chaotic for us, one ritual remains. Breakfast. I’ve been a devoted breakfast eater for years now (I’m proud to say I come from breakfast and ice cream for dessert-eating stock). Breakfast has been habit for me for as long as I can remember, but as I’ve gotten older and life feels less and less structured and dependable, I find I rely on the ritual of sitting down in the morning to keep me feeling sane. It’s a way to snatch a little peace and quiet before the day runs away.

For Chris, things have looked quite different until recently. When he lived alone, the first thing he did in the morning was walk Pico the two blocks through Gowanus past the Italian bakers waking up and the auto mechanics chatting outside their shop, to the neighborhood coffee shop where he’d order a cortado and a pastry (usually a bran muffin, at least the man had some health sense about things). He  quaffed the coffee on the short stroll home, and picked at the muffin before and after his shower, and then again on his way to work.

This was one of those things I just had to put my foot down about. Given our sometimes misaligned work schedules, we usually only sit down for dinner at home a couple of nights a week. But I felt strongly that we needed something to anchor us to the table, to home, to one another every day. (More to the point, I feel a little nervous about leaving the house before I’ve had my coffee; it’s really not a good idea for me or anyone I might encounter.)

And so, each weekday  since we’ve moved in together, Chris and I sit down at the table over coffee and a light meal. NPR’s Morning Edition patters away comfortingly in the background. Chris grinds the coffee (yup, he actually grinds it with a hand grinder) and I get breakfast going. Then we slurp the strong, black stuff we brew from our respective mugs and eat in silence, each of us reading, taking our time chasing sleep from our systems.

Sometimes breakfast is oatmeal, especially in cooler weather, sometimes Swiss mueslix, sometimes even a green smoothie (especially if we’ve had a particularly indulgent evening the night before). But more often than not, it’s a handful of granola, some plain whole milk yogurt, and a bit of whatever fresh fruit we happen to have in the house. I try to have granola on hand all the time (I’m a bit of a compulsive larder re-filler, running out of my staples feels as unnerving as surprise service changes on the Subway). It takes just moments to fix a bowl, and the comforting constance of the meal gives me a sense of heading off into the potentially haywire day with a solid, grounded start.

I found a few free minutes between tasks today, so I tossed a batch together to take on vacation. This granola is leaps and bounds better than any boxed cereal you can buy (except for the sweet stuff I love to put on ice cream. We weren’t allowed sugar cereal growing up, so I went hog wild when I spotted the cereal bins in my college dining hall. I’ve been in an only mildly successful recovery program from Cap’n Crunch, Golden Grahams and Cracklin’ Oat Bran…atop ice cream or, in moments of supposed virtue, frozen yogurt… since I graduated.)

It takes less than five minutes to put my granola together, especially if you keep the ingredients in stock in your pantry  (it helps that all of these foods have long shelf lives, all which can be extended by storing them in the fridge). And as long as you set yourself a timer reminding you to check on the trays and rotate them every twenty minutes or so, you can get on with anything else you might need to tackle while the good stuff bakes.

It’s this kind of homemade fast food– simple, reassuring, even predictable– that I rely on for everyday nourishment and to slow down the crazy, too.

I base my recipe loosely on Molly Wizenberg’s Fifth. I sub a cup each of raw pumpkin and sunflower seeds for two of her recommended four cups of nuts, mostly for economy’s sake and also because I tend to keep a lot of seeds around to toast and throw into salads. As for the nuts themselves, I particularly like pecans or cashews in this recipe. I also like to  add lots of unsweetened dried cherries (add after baking) and a few more big pinches of salt (Start with her recommended 2 tsp. and taste again after baking. If you prefer a saltier crunch, add while the granola is still warm and somewhat sticky). Play around with this recipe and see what kind of crazy quilt morning meal you can come up with for yourself.