I wrote this on July 23, the morning we took off. I was having some tech problems then… so here it is, late (and after the fact). Update: I’m still not ready. In fact, I’m feeling grumbly about being back inside after a mostly barefooted week, spent doing little more than waking, reading, cooking, swimming, napping and staring out at the boats. Feeling ready, OH SO READY, to be moving on from ultra urban living. Here’s what was on my mind a week and a half ago: 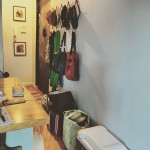 I’ve been thinking about returning here a lot, lately. I’m nervous, though. Too much time has passed. But I have so much to say. It’s been a big year, such a BIG YEAR.  So many things have happened. I want to tell about them, but I’m not sure how yet. I’m not one to keep things quiet (though sometimes my husband wishes I’d keep them just a little bit quieter), but I’m also feeling tentative about telling them in PUBLIC, as in the world of no-filters, anyone-can-read-it public.

We leave for Maine in two hours. Two nights in North Berwick with beloved family on their incredible homestead, and then a week on Isle au Haut with Chris’s family. A night in Portland on the way home (a.k.a. Oysters at Eventide and a four-year-old’s birthday party). I’ll have ten days with no screens, no connection. I brought a notebook– I always write like mad when I leave the City. This trip, no doubt, will be no exception.

Maybe I’ll be ready when I get home.