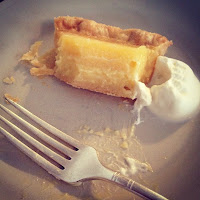 I’m feeling like a bona fide adult today… well, except for the fact that I am, at present– 5:26 pm, that is– , eating a generous slice of lemon chess pie (see, the glorious thing’s almost gone!) at my friends’ shop (and my former workplace), Four and Twenty Blackbirds.  But aside from the fact that I am almost certainly spoiling my dinner, I’m feeling grown up. My woodworker-cum-contractor finally finished up installing my new shelves and furniture while I was up in MA last week, and so Trouble and I drove down to Brooklyn together on Sunday to take care of some home improvements and finally unpack.

I won’t bore you with the details. They involve a lot of sawdust, styrofoam padding (the only reason that’s any fun to talk about is in order to mention that I got to unwrap the buttercup colored Kitchen Aid Pro mixer that my brother sent me as a housewarming present– he definitely inherited my mom’s prescient and overly decadent gift giving gene), lots of banged elbows and box-induced paper cuts, trips to Ikea and Target and a very weary credit card.

The grown up-hood, certainly, stems partly from unpacking all of my things into my apartment. No roommate, no hand me down mattress from a previous tenant, no attempting to come up with a formula to measure the degree of reasonableness of bringing my entire cookbook collection with me in relation to how long the sublet is for. No subletting, no lease. My apartment.

But what really felt nest-y was more about the quiet moments, what actually happened in my apartment in the short 36 hours Trouble was here with me. On Sunday night, we ate out at a great new neighborhood joint called Bar Corvo (courtesy of the folks who’ve been running the wildly successful Al di La in Park Slope for many years now), sharing first aperitifs, and then splitting a bottle of Moltepulciano. We walked the two blocks home, a little stumbly but perfectly functional, then changed into sweatpants and headed up to my roof with nips of Whitle Pig Rye (another gift from my excessively generous brother, this one for Christmas– it is sooo good). We only lasted a little while in the chilly evening, lazing on lounge chairs and gazing off at the Manhattan skyline. Back downstairs, with the clock nearing midnight, Trouble pulled a book of Neruda from my shelf and we began to read– first I would read a poem in English from the downy surroundings of the bed, then he would take the book, stand, and animately recite the same poem in Spanish, his native tongue. 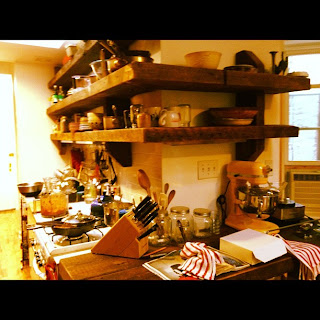 We passed the book back and forth until my eyes wouldn’t stay open any longer, then nodded off to bed.

The next night, Monday, after 13 hours of unpacking, cleaning, drilling, shopping, organizing and repeated runs to the hardware store across the street, I decided to cook. The apartment was still a mess, and my compulsive side said to clean, clean, clean until everything was done. But Trouble was sleepy, and he had been working his tail off all day to help me without complaint. The kitchen, at least, was in workable shape (that’s it, to the right there). So I pulled a pound of shrimp I had bought at Fairway when we were in Red Hook to make an Ikea run earlier in the day, and set to making Mexican shrimp in garlic and chipotle sauce, a blissfully simple and deeply satisfying meal consisting of a sauce made up of 2 heads of sliced garlic, half a can of chipotle peppers, some fresh tomatoes, lime juice and salt all pureed together, served with sautéed shrimp and white rice. We whipped up a quick salad of jicama, avocado, red onion and lime juice and opened a bottle of wine. It was red, and didn’t pair very well. It didn’t matter, though. 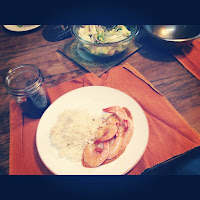 We peeled the shrimp with our fingers, tossing the shells into a metal mixing bowl I don’t think I’ve laid eyes on since I packed up at my first (and longest) Brooklyn address two and a half years ago. We brought the rice to our mouths with the forks from the gaggle of silverware my mom and dad were given as wedding presents (long before their divorce and each of their subsequent cancers and deaths were visible through even the most powerful of crystal balls). The placemats and napkins were deep red and burnt orange, a set I picked up in the early days of my domestic leanings.

After licking the plates clean, we washed up together, talking about love and radio as we went. Then we shared a bowl of caramel ice cream and sipped whiskey in bed while I read a magazine article aloud to Trouble.

I woke beside my love this morning, rested and with a sense of settledness in my belly that’s been gone so long it was almost startling to notice it hanging out there. After a stretch of time in my life that’s been marked by all too many lasts– last words, last breaths, last meals, last good-byes– it seems a terrific act of defiance to be marking new beginnings. No more nomadic living– begging couch space from friends for weeks a time, constantly packing and unpacking. No more big “what’s” or “where’s nexts”. At least not anytime soon. For the first time in a very long time, I know right where I am and the building blocks of the next few months. And with a little more stability beneath me– and a careful, if humorous eye on the god of surprises that can always upset our best laid plans–  my goal is to spend more time both pondering and reveling in the little things for a while. To focus on making smaller decisions… like what to do with the two dozen eggs in my fridge from our chickens up north or the first Jersey strawberries of the season, sitting, sassy in their spring blush, on my new kitchen counter.