I admit, I’ve been a little cranky with New York lately. Well, okay, these past few years. As anyone who has ever lived in New York knows, she can mess you around. She always has a way of kicking you when you’re down. But when you’re riding high, she can make you feel, oh… I don’t really have the words. I could quote writers and poets past and present, from E.B. White’s “Here is New York” to Alicia Keys’s “Empire State of Mind” to all the fabulous nuggets that came out of the (at times, admittedly, quite dark) documentary film, “The Cruise“.  But nothing seems to do justice to the incredible sensation of feeling like you’re in lockstep with this enormous breathing, writhing metropolis. It’s like she’s courting you, putting you in the limelight, and sending a lot of luck your way.

But the roller coaster of highs and lows has gotten to me over the years. And they say if you love something you should let it go… So I’ve taken a few long breaks from New York over the past couple of years. But this most recent one was by far the longest. For over nine months, I was without an address of my own in Brooklyn. And man, did I miss it. Waaaaay more than I expected to. It was like that lover you think you’re so over… until you say goodbye. And realize that, despite all the torment and bickering, you’ve built something, and you just can’t shake the damn thing. For me, New York has always been like that.

So, after a stint living and studying in Portland, Maine last fall (a lovely town, but not quite gritty enough for my liking), I bit the bullet and decided to take New York– flaws, frustrations and all — and really make her my own. That is, I bought an apartment.

It’s been an experience so far. Mostly great– I have a simple, bright little place of my own. I’ve even got high ceilings replete with skylights, a washing machine (if it ever gets off backorder at Lowe’s), and a gorgeous view from my amazing roof deck. But there have also been the inherent move-in headaches– contractors, movers, thin walls (luckily all of my neighbors have, thus far at least, been pretty forgiving of my novice blunders like setting the fire alarm off with steak smoke the first night I lived in my new place!). And alway, ALWAYS, factoring in the four flights of stairs. 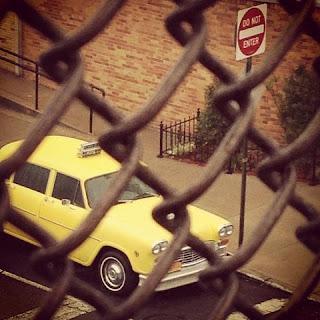 The other day, sick and tired of trying to get any work done in a room filled with sawdust (my contractor has been taking his sweet ass time getting his work on my apartment done), chunks of drywall and unpacked boxes, I headed out in the late April drizzle for my brand of New York therapy– a long walk and an afternoon spent with a book, a journal and my computer in a cozy cafe. I needed to remember how, just when you feel like New York is causing you tear your hair out, just when you’re ready to leave her (yet again), you just need to take her out on a date. Break out of the rut. For me, that means heading– ALONE– to a neighborhood with which I’m not too familiar. It’s like magic every time– suddenly, I’m seeing the City with fresh eyes, appreciating her beauty, her quirks, her vulnerable soft spots and, of course, her sass.

I rode the G train up to Greenpoint. On McGuinness Boulevard,  I passed open garage doors, revealing ironworkers hidden behind safety glasses. Polish grandmothers walked the avenue, cloth shopping bags in hand, doing their daily marketing. Dusty old record stores beckoned me. But the weather was too dreary for window-shopping, so I continued north toward Queens. Somewhere about halfway across the Pulaski Bridge, red umbrella huddled close in a futile attempt to keep the raw wind and damp off my cotton sweatshirt (poor choice of outerwear, Sara), something caught my eye. I looked down off the bridge. There, parked alongside a nondescript brick hotel, was an antique yellow cab! Honestly, I don’t think I’ve seen one of them since I was a kid, desperately trying to keep up with my dad as he tugged me through Times Square for our annual theater date. But there it was, just waiting to be spotted. Elegant, classy, and all too forgotten. 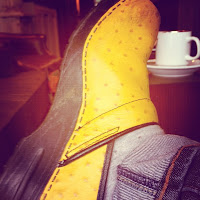 A huge, goofy grin spread across my face. And, just at that moment, as I was looking down through the chain-link fence, a 30-something man walking in the other direction passed by, turned his head toward me, and said rather emphatically, “Beautiful!”. (Some of you may find that skeevy, sexist even. I’m not going to get into the politics and nuances of when I like a random compliment on the street and when it falls into the ick category of dirty catcall. Suffice it to say, this time– when I hadn’t showered in a day and I was dressed in a gray hoodie, rolled up consignment jeans and decidedly unsexy but oh so happy making yellow clogs– it was the best. The absolute best).

I hurried on down the bridge to the Queens side where, just at the bottom of the ramp sits one of the best cafes in all of the five boroughs, Sweetleaf on Jackson Avenue in Long Island City (a favorite neighborhood of mine, one I secretly hope to live, or at least have an extended stay, in someday. Don’t tell Brooklyn). I settled in with a mug of spicy ginger tea and a decadent hunk of their dangerously rich carrot cake, and whiled away the afternoon. Beside me, artists, retirees and techies sat reading, chatting and working. Folks came in to order with their dogs happily panting beside them. A local construction worker came in to do his daily 20-drink order for his entire team. Unfairly chic baristas steamed milk and pulled espresso.

I sighed, sunk deeper into my leather club chair, and tucked my socked feet underneath me. New York and I were back together again. And though I still think her venom is some of the deadliest in the world, when we’ve just made up, it’s pure bliss.

A string of haikus from the day:

G train in the rain
Only time I like to ride
It’s cozier when it’s wet.

Cities are like girls
Lovely and vicious at once
But still you swoon anew.