It’s our first ninety-degree day here in Brooklyn, and I just gave Pico a bath on the roof. And while I was busy cracking up while he pushed his soapy flank against me wiggling to avoid the hose’s chilly “shower” setting, I found I wanted to cry.

I just couldn’t stop thinking, I’m here, on this beautiful little strip of privacy and light and sky, on top of my home. My HOME. I love this place. I love that I can pad up here barefoot and give my dog a bath on the roof and… in three weeks, we’ll have moved out.

Walking back downstairs, I was overtaken with what the Brazilians call saudade. It’s a term that’s tricky to translate, but essentially means an intense feeling of longing and nostalgia, one that often sets in even before a loss or departure has occurred. It’s a decidedly romantic feeling to give a name to, one that fits in perfectly with the Brazilian big-heartedness and intensity of emotion so beloved to me. My friend Olivia interprets its meaning this way: 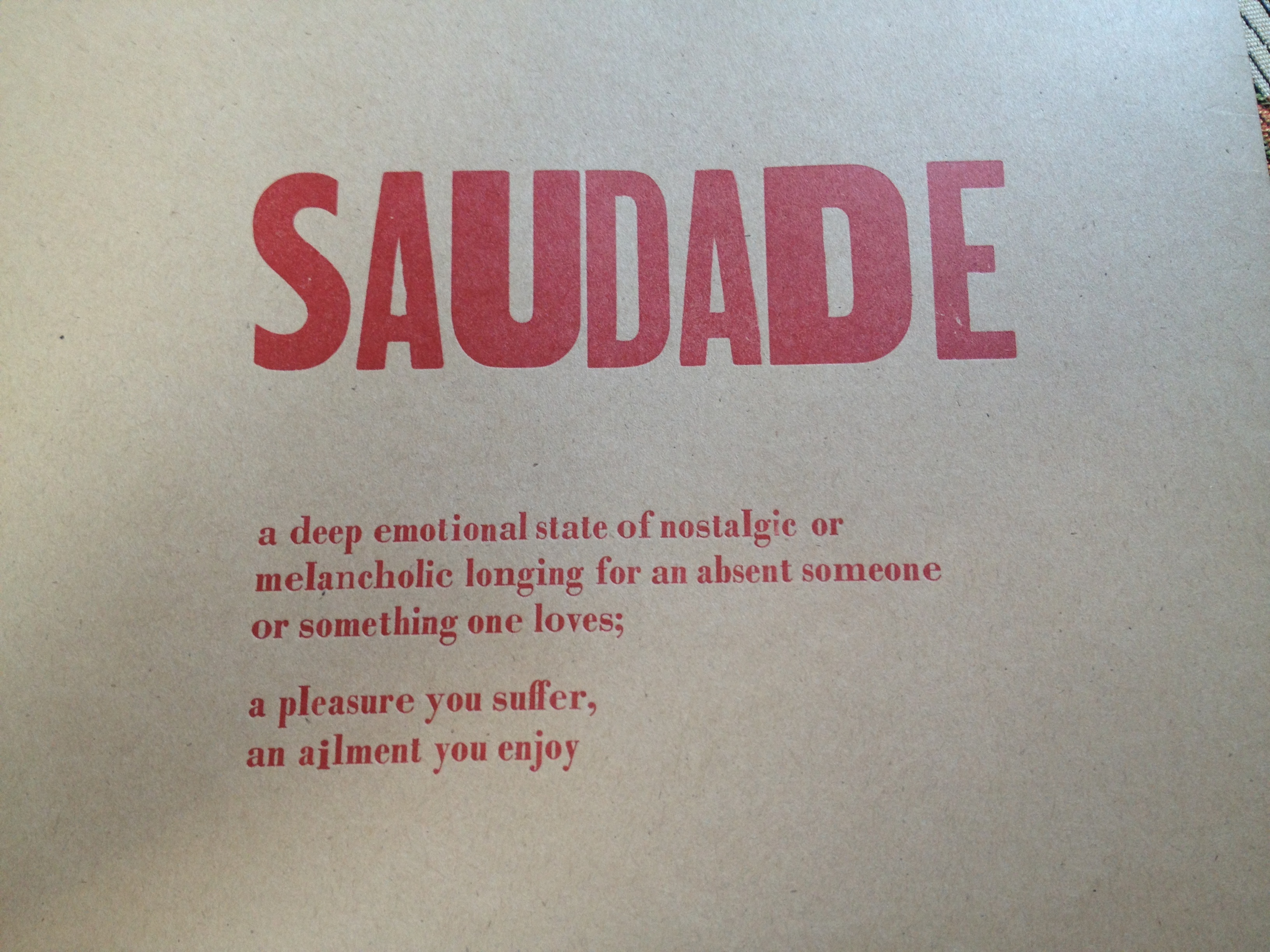 I don’t do well with change. That is, perhaps, a gross understatement. I tend to totally unhinge with change. I work myself up into a tizzy anticipating the feeling of being unsettled and the time it takes to readjust, to re-nest.

I am a serious needer of nests. And this little apartment– all 475 square feet of it (counting the hallway that doubles as my kitchen) –has been the only steady nest in my life in the past decade.

See, in the stretch of years between when my mom got sick (fall of 2004, the same autumn I started college) and when my dad passed away (February of 2011), I moved nearly constantly. For the first four years it was the habitual change of dorm room, the move off campus, and back and forthing from Boston to New York every couple weeks, plus two summers that took me abroad first to France, then to Ontario, and then a semester in South Africa.

When, in my final semester, I moved home to my childhood home to take care of my mom as her body finally caved to pancreatic cancer, I imagined (per doctor’s speculations) I would be hunkering down for six months at least, maybe more than a year.  I ordered seeds from Johnny’s and told my mom she could watch from the window as I breathed new life into her overgrown vegetable garden.  So you can imagine my brother’s and my shock when she slipped away just a month later. The morning after she died, I woke early and sowed some of the seeds I’d bought in trays of soil. It was only March, and far too early to plant outside. But I needed new life to counter death.

Two weeks later, after a frenetic (some might say manic) stretch of going through 22 years of accumulated memories and stuff, I fled.

Amherst, in Western Massachusetts. Uruguay. An apartment in Brooklyn, but with a travel-heavy job that had me on the road monthly. Brazil. Brooklyn again. Then a friend’s floor in Brooklyn. Isle au Haut, Maine. Portland, Maine. Brazil, round two. Western Massachusetts again. I became peripatetic.  The moves seem a blur. Some were “moves” in earnest– station wagons and UHaul trucks– some merely extended trips. It seemed I was always packing or unpacking a suitcase. I kept my toiletry bag stocked (a habit I maintain to this day). It was always my own doing, that going going, but I wasn’t holding up well.

A month after completing a dreamy, immersive semester at the Salt Institute for Documentary Studies in Portland, I began looking for apartments to buy in Brooklyn. I needed to be in a place with friends and family, people who would hold me accountable. I hadn’t imagined Brooklyn was where I would land– I craved open space and quiet– but it was the epicenter of my social and work lives, a place that had, against my intent, become something like home. I hoped the people I knew there would keep me from running again. I hoped that having a place to call my own would force me to stick around, learn to ride out the urge to hit the road again. I couldn’t say then– and still can’t now– exactly how I knew I needed to stop roaming around, I just knew. It was time to build a sense of place again, to belong somewhere.

A silver lining to the awful hand I had been dealt in the years previous was the sudden inheritance of three lives’ worth of careful savings, mom’s, dad’s, and my dad’s dad’s. Three deaths within three years, three sets of plans and dreams liquidated. I hadn’t been able to touch the money since my mom died, but the urge to root finally trumped the strangeness and guilt of spending their money for my own life.

I set my price low (low by Brooklyn standards, that is).  I didn’t need much space, but I demanded light, a workable kitchen, and, if at all possible, outdoor space. I was shown some awful apartments. One was not only dungeon dark, but oddly laid out, and seemed to me it would be impossible to entertain in; all the space was taken up by the foyer. No one needs a foyer as far as I’m concerned, especially not a twenty-five year old. Another apartment was plenty big, but so low and dark that, even in mid-afternoon, all the lights had be flipped on. One was flooded with light and sat on the corner of two beautiful blocks, but the kitchen was smashed into a tiny corner. I began to lose hope, my mind wandering back to the drawing board.

After a couple of weeks more of obsessively scouring listings online (which, a word to the wise, are few and far between in January), I saw something that caught my eye; a picture of a building’s entrance surrounded by a black iron gate and flanked with flowers in bloom. I recognized the flowers, remembered having passed them innumerable times on walks down Washington Avenue. I’d always been struck that, on a street so busy and so ill-kept, someone had thought to plant and tend flowers. An act of defiance. A splash of color amid the debris and shuttered storefronts.

The apartment was small and idiosyncratic, but I fell in love with it immediately. Exposed brick walls, eleven-foot ceilings, three enormous windows and skylights to boot. It was on the top floor and faced an interior courtyard, which equalled hard-to-come-by quiet. The “kitchen” (what there was of it) was fitted into the narrow entrance hallway, but I could envision how a little rearranging and a cheap new countertop would give me enough space to chop and sear for a crowd. There was plenty I would want to change, I knew, but I looked forward to the opportunity to make the place my own, bit by bit. The decked roof– an area I would share with only one other person, a neighbor I had yet to meet, but someone who had taken the care to build planters that surrounded the deck with what I was sure would be greenery in the warmer months– sealed the deal.  I made an offer that night.

I was sure I was settling into 4RL for a good long stretch. Five years at least. I was in a long distance relationship with a weak foundation, one I knew at my core wouldn’t last. And I was gathering the courage to start life on my own again from the safety and steadiness of my newfound haven.

Fast forward two and a half years. I’ve ripped out ceilings and put in heavy beamed shelving. I designed an entirely new bathroom that’s anchored by a very old sink. The kitchen has been rearranged Tetris-style so that I have more counter space and everything, miraculously, fits. I never re-installed the smoke detector I took down after, on my first night in the apartment, I set it to beeping incessantly from searing a steak on the stovetop. I’ve hosted dinner parties for twelve, a Hurricane Sandy refuge for blacked-out friends, and enjoyed countless quiet hours alone. And when, nearly two years into my living there, the fact that Chris and I were ready to move in together snuck up on me, I had some more shelves built and a slim pot rack hung along the kitchen wall and our family of three–two “grown ups” and a Boston terrier– happily squeezed in. I had thought the apartment was finished before,  but, post-Chris-prep-renovation, when my brother dropped by for a beer, he commented that it finally seemed complete. He was right; Chris has had that effect on so many aspects of my life.

And now, we’re going. It’s only a few blocks, so we won’t have to deal with the unnerving meta-effects of uprooting (new friends, new dog park, new supermarket, new zip code, etc.). I know eventually that will feel like home too, in new and unexpected ways. We’re going for plenty of good reasons, with all sorts of bonuses on top (read: soon-to-be-husband, dog, bigger kitchen, across the street access to the dog park, butcher and cheesemonger neighbors- yes, seriously). Yet though we haven’t packed a single box yet, I’m feeling, even in anticipation, the intensity of  the loss of this place.

Perhaps the time to feel the nostalgia pre-emptively is, in itself, a gift. As Toni Morrison wisely said, “It is sheer good fortune to miss someone before they leave you.” I didn’t have such luck with either of my parents; their exits from my life crept up too fast. But with the home I made in their wake, I’ve been given the gift of time. To rebuild, to recuperate, and now, to take off.