My mom has been on my mind lately. A lot.

I presume this is primarily because I’m pregnant, and her absence from my life—it’s been more than eight years now since she died—is more conspicuous than it’s ever been. I’ll soon become a motherless mother. I would give almost anything for this to be different.

Though I sometimes assume, in a melancholy sort of way, that I should be sitting around during my inevitably sleepy afternoon hours thinking of mom, or flipping through old photos to rekindle memories, it’s only at night, during sleep, that I seem to embrace thoughts of Cabby. Virtually every night now, she visits me in my increasingly vivid dreams. In these running pictures, she’s in various states of sickness and health; sometimes I seem to know that she’s dying, sometimes I’m aware that she’s already gone, and the visit is as if from a ghost. In other dreams—the variety that are both my favorite and the ones I find saddest—it’s as though the cancer had never taken hold, and I relate to her in a manner I would deem “normal,” which is to say act without the fear of losing, or awareness of having lost, her.

In more wakeful moments, though— especially when I catch myself looking into the second bedroom we thought we needed for a baby when we moved two years ago (“Things,” as mom’s and my favorite poet Mary Oliver reminds us, “take the time they take”), where the last quilt mom made hangs, presiding— I sometimes wonder what she’d make of Chris’s and my imminent move out of the City. I imagine she’d be pleased, in her quiet but obvious way. Certainly she’d be more willing to visit Kingston than she would have been to come to Brooklyn. But I also wonder if she’d have words of caution for me. For her, the suburbs never scratched at the rural living itch that followed her throughout her adult life. When I knew her, she was lonely and always felt out of place. Our white bread Westchester town was a supposed compromise of my dad’s love (and need) of the city and mom’s yearning for the country that never satisfied either of them; whether it’s true or not, I’ve long attributed a hunk of their reasoning behind separating to this unhappy tug-of-war. While we’re heading north beyond the burbs, I can’t help but wonder if she’d be nervous for us, for me as a new mom, as a woman with a life about to change and refocus dramatically.

What I do know is that Cab, as everyone called her, would be unabashedly excited about the garden I plan to build in our new backyard. Afternoons this time of year always found mom changing out of her work clothes and into tattered old cottonwear to dig in her  garden, reveling in the time alone, the fecund spring air so full of greens and damp browns, and the satisfying exhaustion that follows physical work. She may have planted peas by now, the only crop in the garden whose sowing ever interested me, and would soon be making a trip to the local gardening store to walk through the humid, loamy air of the greenhouses, pulling a rusted Radio Flyer wagon behind her, searching for tomato starts and buying bags of fertilizer.

She was never much of a cook, but my mom loved to eat, especially from that garden. And it was growing up, during summers, that I first understood that simple, fresh food, left mostly alone, is very good. There was no dogma, only a working mom who hated a hot stove.

We grew up without air conditioning—mom never believed in such modern conveniences as air cooling devices, answering machines or microwaves—and so summer cooking took her no-fuss approach to dinner to a whole new level. Minimal time over the range’s heat was the name of the game.

The fat peas never made it out of the garden—we (well, mostly I) ate them out of hand, standing barefoot in the soft, sun-warmed soil of the garden, pulling the sugar snaps off their curling vines, sometimes peeling back the fiber than connected the two sides of the pod to reveal the peas nestled neatly in that gentle curve, sometimes popping the sweet things into my mouth whole. But most of the produce from that small plot did come indoors; that woman never let a hot summer night go by without a plate of thickly sliced tomatoes and cucumbers, accompanied by a humble, WASPy “dip” of heavily dilled sour cream, mayonnaise and milk, grace the table. I hated raw tomatoes as a kid, but I ate the cucumbers by the fistful. Some nights, there’d be simply steamed summer squash and zucchini, heavily buttered and sour creamed. Pole beans were similarly steamed and buttered. My mom, who walked many miles a day in order not to put on weight, never shied away from dairy fat. God bless her.

Dessert (a course we never skipped in my house) in those hot, humid days was most often a popsicle or two eaten on the back steps while swatting at bloodthirsty mosquitoes. Occasionally, we piled into the car to head to Friendly’s in town, or Ben and Jerry’s a bit farther north. My older brother, Pete, usually got a peanut butter cup sundae, my dad—the most severe and shameless ice cream addict I’ve ever known—changed his order with the times (there was a major frozen yogurt phase) and his mood, and my preferences evolved with age. But mom never faltered: a coffee hot fudge sundae with whipped cream and walnuts. I usually got the maraschino cherry on top, as she saw it as extraneous to the whole point of the thing—the decadent creamy goodness below.

I love to think of mom eating. Though she never had sophisticated taste, she knew just what she liked, and she consumed it lustily. One of her favorite treats in spring was rhubarb. We had a small plant in the front yard, but she heavily subsidized her supply of the slender pink and green stalks at the local Grand Union, unconscious, and uncaring, of provenance. And while I’m a bit fussier about sourcing, mom was right; while there are certain things (like apples) that should never be bought from a supermarket shelf, others—like rhubarb—hold up just fine to shipping and chilling, and one can hardly tell a difference in taste, especially when the food has been cooked.

These days, it’s fashionable to turn rhubarb into elegant tarts, shrubs, and even slice it raw into salads. But the only way my mom cared for rhubarb was stewed. I didn’t know how she prepared it, but, when I was young, I recognized well its tangy pink scent as it permeated the house. Though stewed rhubarb, in my (and, especially, my husband’s) opinion, is best chilled, mom could never wait that long for her first taste. After dinner was done and the dishes washed, she’d spoon up a big bowl of the slippery, soupy, rather unattractive stuff, top it with a healthy glug of heavy cream, then sit in the family room in the rocking chair (for some reason, the only place she ever ate rhubarb) and knock it back, spoonful by spoonful, practically moaning with pleasure.

Then she’d go back for seconds.

I didn’t much care for rhubarb then (though over plenty of vanilla ice cream there was, and remains, no fruit I’d ever turn down), but I delighted in the particular pleasure she took in the strange plant. Every spring, without fail, she’d remind me, taking a brief break from slurping to “whew” as if winded, that rhubarb makes you sweat (note: it doesn’t make me or anyone else that I know sweat, but she swore it was a Bergen trait, like the dreaded shapeless chin that makes us all instantly recognizable as family). 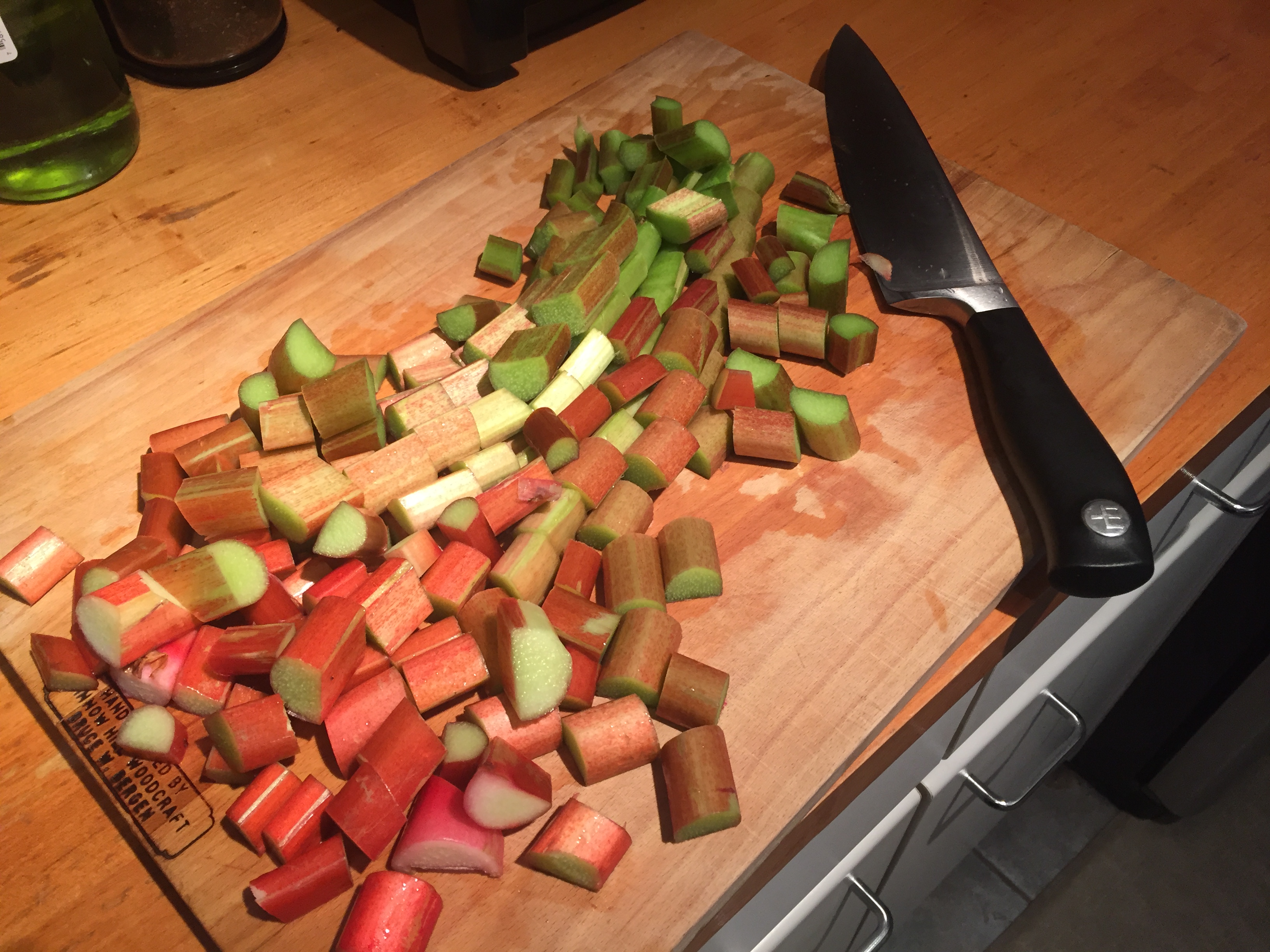 I’ve come around to rhubarb in a big way, and I turn giddy (and utterly disregard budget constraints) when it appears at the market in spring, loading up on the first overpriced stalks by the bagful. Though I’ll happily eat rhubarb in any form, I’m particularly partial to rustic crisps (heavily topped, of course, with vanilla ice cream) and rhubarb roasted with dry white wine, vanilla and a hit of sugar (a la Molly Wizenberg’s adaptation of a Canal House recipe). I also go fairly apeshit over a rhubarb pie (my stint working with Melissa and Emily Elsen at the then newly opened Four and Twenty Blackbirds was very helpful in feeding that yen). But, without fail, when rhubarb appears each spring, a batched of stewed—in honor of mom—comes first.

Early this morning, in the park with Pico, I caught a breeze that carried a scent so redolent of spring in the ‘burbs that I nearly burst into tears. I became instantly sad about leaving Brooklyn, sad about mom and the Grammy my kids will never know, and turned generally nostalgic. I returned home to a pile of papers that needed grading, but, in such a mood, knew I needed to cook and write. I settled on the bundle of rhubarb I purchased earlier in the week on a jet-lagged early morning visit to the Union Square market. I thought, briefly, of roasting the rosy stalks as I like to do, but catching a glimpse of mom’s quilt as I washed the breakfast dishes convinced me that stewing was the only thing that would suit my state of mind. I chopped the stalks into rough chunks, put them in a saucepan with a little water, and sprinkled them with sugar. After bringing it all to a boil, I gave a quick stir, lowered to a simmer, and sat down to write. I can smell, now, that the rhubarb is ready. I won’t make it to lunch without downing my first, warm bowl.