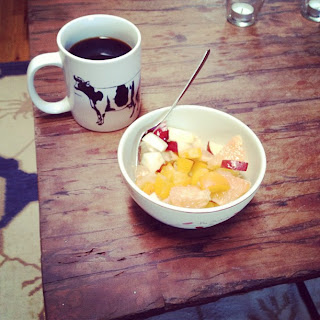 See that? That’s a breakfast table, set for one. It’s 7:58 on a Saturday morning, and it’s the first time in a week that I’ve woken up or eaten breakfast alone in my apartment. Yesterday after lunch at Chavela’s, my big brother, Pete, hopped the 2 to the B15 to JFK, bound back for San Francisco.And it feels oddly quiet around here.

I remember having this same sensation when Pete moved away from Brooklyn in the summer of 2009. The whole borough felt strangely vacant, and I began to wonder what it means to hold family together when you live on opposite coasts.

You see, a year before that, I moved to Brooklyn for the first time. Pete lived in Boerum Hill at the time, and he was a big part of the reason I came. We had lost our mom to pancreatic cancer in 2008, and I was feeling the need to be near him– the only person who’d been through the four-year fire of caretaking and grief with me.

So I packed up my Carhartts and traded my muddy boots for presentable walking shoes and a 21st floor office.  I found a bright apartment in Kensington, just a few stops beyond Pete on the F.

Pete and I had a fine time of it that year, with brother-sister dates pretty much every week. We took long rambling walks, ate a lot of pizza from Lucali in Carroll Gardens,  experimented in our respective anomalously large City kitchens, and blew too much money as we checked Brooklyn restaurants off our “to try” list, often sharing a bottle of wine between us (I used to think people mistook us for a couple, but if they were paying any attention at all, there’s no way they could have missed the family resemblance).

Having Pete close proved an incredible reassurance. And as we rounded the one year anniversary of losing Mom, it felt like our family was beginning to take some sort of shape again.  (I’ve since decided that being separated by a couple of subway stops is the ideal separation for a successful sibling relationship– enough space so that you don’t kill each other, but no planes, cars or commuter lines involved.)

But of course, things change and people move on, especially when the parties involved are both in their twenties. Pete was restless, and ready to move on with his life. For him, that meant law school.  And though I rallied hard for him to accept a scholarship made by a local law school, a perfect storm of feeling stagnant in New York and a girlfriend beckoning from the Bay pulled him across the country.

He’s been out there, living in the Mission, for three years now, and Brooklyn hasn’t felt the same for me since. So I relish when Pete comes to visit. Often, I only get to snatch him for an evening or two between family obligations. But this trip, he planned to stay the whole time with my in my new place and spend most of our time together.

We packed it full of signature Brooklyn doings– we ate at Franny’s his first night in town (I introduced him to the perpetually packed North Flatbush restaurant when I gave him a homemade Brooklyn restaurant guide I had researched and compiled when he first moved here); spent Mother’s Day morning strolling down a magnificent stretch of Washington Avenue in Fort Greene to pick up my bike under the BQE; had lunch in the Village with Pete’s childhood best friend (and a sort of second brother figure to me), Jordan; and took spinning classes at the gym like we did when we used to be home on break in Westchester together. We had a dinner at an old red-sauce joint in Little italy with Nan and Jordan’s parents, walked to my alma-mater Four and Twenty Blackbirds to eat slices of pie and buy a gift certificate for some friends moving to Brooklyn, hauled soil up to my roof so I could re-pot my flowers and herbs, and started watching Friday Night Lights (we quickly got wrapped up with much the same vigor we used to harness towards The West Wing). We hosted a dinner for my oldest friend, Theo, and my closest Brooklyn friend, Molly. (There they are. Aren’t they good looking? Theo’s the most dapper human being I know, and Molly rocks the Ohio farm girl easy-peasy thing like no one I know. Molly passed her boards to become a nurse practitioner that morning, so I made this chocolate cake. I told you I developed a serious a crush on Orangette last time).

Pete and I even jumped in the car to leave the Borough a couple of times. On Wednesday, a glorious spring day, we headed out to Forest Hills in Queens for a strikingly memorable meal at Wafa’s, and then continued out to Flushing for a Mets game at Citi Field. From our seats above the third base line, we drank IPA while munching on Cracker Jack (a mighty combination which you should absolutely try if you haven’t already) and Pete’s signature piercing baseball clap had me covering my left ear all night long. Thursday night we drove up our old stomping grounds to commemorate the retirement of our mom’s longtime boss and a dear family friend, an extraordinary man named Bill Barnes– a towering gentle giant who taught me to garden, study and drink whiskey– from the Clearview School.

The week was full of the kind of easy, intimate conversations only siblings can have about love, loss, and nostalgia. We fretted over our futures (who else will do it for us now?) and we remembered my dad a lot, as we often do here in New York (He was born in Brooklyn, as were both of his parents, and when I first moved to this side of the Park, he used to tell me how he was mugged on Grand Army Plaza as a kid on his way home from school. Having been part of the great urban exodus in the 60s, he was both amused and tickled when both Pete and I landed here after college).

Sure, there were annoyances, too. After all, we’re siblings, and we know how to needle each other and get each other’s goat like no one else.

Yesterday, after Pete left, I spent a couple of hours quietly pounding away at my keyboard in a neighborhood coffee shop, catching up on work I’ve been neglecting and rather enjoying the quiet. Then I came home and scrubbed the bathroom floors. But when I was done, I found myself looking up, half expecting to see Pete rolling in from yet another gym visit or to hear him ask, “Okay, so what’s our plan for the rest of the day?” But I was met only with quiet.

With Pete around, this place felt, unmistakably, like home. Like family, and past, and memory and warmth. It’s not that friends and lovers don’t count– they do, immeasurably. But this was something else, the minutia, wreaking of growing up and coming into our own side by side, that did it– doing the dishes together, making and unmaking the bed together, serving each other oatmeal in the morning and tea in the evening and one another’s familiar mannerisms. Sometimes, for all the searching and wandering I’ve done in the last few years, and all the unmooring that’s rendered Pete’s and my senses of family and place fractured, it’s important for me to remember that finding home is much more about gathering around you the people you love than it is about finding some “perfect” place or returning to an imagined “perfect” past. Though I’ll still never forgive San Francisco for stealing my brother away, and though I’d prefer a mere subway ride than a day-long trip on a plane, family is always worth the trip.