Wow. It’s, uh, been a while since I was last here. And I was a little nervous to come back again. But after a few false starts this warm May morning, I decided to peek in and have a look around.  I’ve been pretty worked up these past few months, and now that I’ve found  a moment to breathe, It’s time to take stock.

I was pretty sure I was going to let this whole blog thing die. There are some old ghosts lurking here and, frankly, it feels like this writing belongs to another life. A lot’s happened since I last posted (yup, that’s October 2012 you see there on that last post, Hurricane Sandy-weirder-than-sci-fi-apocalypto-week). After so long,  why bother returning? Why not just start over, clean slate?

Here’s the thing. I miss writing. I haven’t been doing much of it lately. Not this kind at least.  I’ve been doing a hell of a lot of the kind of writing that makes me procrastinate with Apartment Therapy and Design Sponge and other people’s Instagram and checking my email (again) and finally sitting down to write a few tortured paragraphs toward completing my dissertation proposal. Which is all well and good in that, hopefully, eventually, it’ll be born into something fruitful, something I can be proud of. But it doesn’t give much back to me in the way of satisfaction.

What’s more, when I do that kind of writing, I don’t seem to want to do any other kind of writing. Or reading. When the academic brain is on, my creativity goes into hiding. Sure, balance and all that, but that’s never been a forté of mine. This is the only way I seem to be able to do it; a thirteen week sprint where I read and write only dense theory-laden, argumentative (and kind of obnoxious) stuff.

This is not good. Exhibit A: One day a few weeks ago Chris innocently asked if I’d read something in The New Yorker, and I snapped back, “Why do you ask? You know I don’t have time!” Turns out he was asking about an article I had, in fact, managed to read on a commute in to school. Not only had I read it, I had marked it up with stars and notes, finding it relevant to my dissertation research. That, apparently, is exactly why Chris was going to recommend it to me.  “I just thought it might be useful,” he said, rightfully irritated.

I’m always sure, when I’m in the thick of the semester, that I’ll feel that awful low-level anxiety FOREVER, that the “you’re-never-really-done-I-could-read-one-more-chapter-and-actually-have-a-day-off-this-week-but-am-too-glassy-eyed-to-read-anymore-but-are-you-sure-you-really-have-time-to-watch-Parenthood?” feeling will persist in perpetuity and I’ll end up an old, cranky, laptop key-handed monster. The thing is, of course,  just as fast the chaos escalates those early days of the term, it ends. 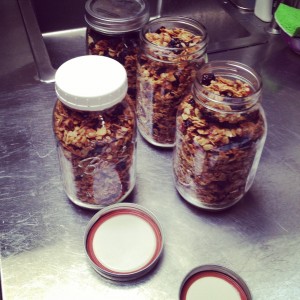 Yesterday was the end. Finally. Sure, I have a few meetings to go to, and a final to grade, but my own work is done for the year. Spellchecked, double spaced, turned in. In fact, my doctoral coursework is over altogether. I went to my last classes this past week, and sent in my last written assignment yesterday. In retrospect, those two years went by in a flash. But they sure felt like a slog when I was in them.

It’s hard to wrap my head around the past two years (okay, four semesters, I’m counting in academic units here). An awful lot has happened.  Despite all my misgivings– which very nearly convinced me to cut and run– I’ve stayed in grad school. There’s been quite a bit of travel, with London and Ireland last summer and frequent visits to the Barbecue belt on the highlight list. And there’s been more personal excitement than I can possibly squeeze into a readable post. I finally caught the attention of a man I’d had my eye on (rather shamelessly) for years. Turns out he’s leaps and bounds better than I imagined he would be (and trust me, I’d set the bar high in my mind’s eye). His deep dimples and sparkly gray-blue eyes still charm me just like they did that muggy April night I first met him. It’s funny to think about that night now. It preceded everything that’s been written here by more than a year. We’ve been attached at the hip now since January of last year, and we’re getting hitched in September. We’re buying an apartment together, too. We’re not going far, just around the corner. We’ll lose the glorious roof here I love so much,  but we’ll gain a bigger kitchen, more room for friends to visit, and, in a major victory for Pico (the man came with a pup), across-the-street-access to the dog park. No farm yet, but I’m not complaining. We’ve got it pretty good.

There’s been so much looking forward and planning and juggling of logistics these past few months that I haven’t been very attendant to what’s happening in the here and now. To real purpose or the small moments of pleasure. I’ve just been trying to stay afloat which, for me, usually takes the form of putting my head down and plowing ahead. Good for productivity, not so great for, well, anything else. I wasn’t the only New Yorker who adopted a gruff Puritan attitude these past few months; during the brutal winter we just finally emerged out of, we were all just trying to make it through without frostbite and hoping that, one day, it’d be spring again. Not that it’s an excuse, but at least there’s a sense of solidarity.

But there’s a sure change in the air. I spent yesterday taking a long walk, playing in the park with the dog, napping, making granola, reading for pleasure. Last night, I slept straight through for the first time in weeks. I woke up rested and actually excited for Saturday. After months of seeing Saturdays as an “opportunity” get work done while Chris was up at the restaurant, I had a day with no to-do list. The weather report said it was due to be 80 by this afternoon, and from the bedroom window I could see that the leaves of the courtyard vines had all burst forth from the week’s rain.

Before Chris headed off to work, we made breakfast, drank coffee, walked the dog. I went to the market, excited to finally pay attention to cooking again but skeptical; there’s been nothing but ratty kale and root crops for months now. I was greeted with a pleasant “so there!” retort to my gloomy expectations. I found ramps and nettles, watercress and asparagus and sorrel. Funny how those first green things can bring such a wave of relief, a promise of hope. We know the deep freeze of winter carries the promise of abundance, but until we see it again, finally taste it, it’s hard to believe.

The other sure sign that the crazy has finally wound down? I come back to my own writing. Every term, like clockwork, and especially when the years is over in full.

This morning, I got the old itch to put some words down just because. I thought about starting over, I really did. I could come up with a new title for a site, divorce today’s writing from all that came before it. But I realized I didn’t really want to. After years of jumping around in short chunks, huge changes and big grief, it  feels good to have some proof of continuity, of making it through. Of settling in. The old posts here may seem as though they belong to another life, but the fact is they don’t.

The world we live in now makes it so easy to edit and revise the way we’re seen, and the way we think about ourselves. Post, cut, undo, delete, unfriend. But life doesn’t work that way. There are no real take backs. And thank god. We’re given the gift of memory which, if we’re lucky, lends a little to the way we act in the nows, the whens, even the ifs. So even if it hurts a little to peer backwards, I’m taking it all along with me.