July has been a tough month. I suppose I shouldn’t be surprised I’ve been feeling this way, as I’ve never been much for high summer. As young kid, I used to pine wistfully after the pale green anticipation of spring, or yearn ahead to the nestling excitement of autumn. I loved going back to school and buying school supplies and the cool crispness of the air. The long, humid, unstructured days of July? Not so much.

There’s something about the kick-back languor of summer that I never quite trusted. Would it pull me through to September’s reassuring days of regimen? Would the mosquitoes quit their incessant buzzing in my hot, still bedroom at night? Would people ever stop telling me I should enjoy the freedom and just go play already?

This year, I’ve been feeling that same unease again.

I was away for most of the month, traveling and working in Brazil.  But even before taking off, I had felt that things were left undone, ends untied. The peas were just starting to come up in the garden, and I wasn’t going to be around to harvest them. The tomatoes were becoming gangly, but in all my rushing around getting ready to go, I hadn’t had time to trellis them. And the night before I flew, I had an argument with a family member that struck right down to bitter bone, leaving me feeling lonely, wrung out and then, inevitably, defensive.

Then there were the weeks away, busy and isolating and moving almost every night, with nothing to do but keep my eye on work, work, work. There was no structure, so I tried frantically to build some. I had a co-author to manage and a to-do list I desperately wanted to check off by the time I returned to the States. But Brazil isn’t a place that’s particularly conducive to getting from point A to B in any sort of direct way. Instead, she seems to take joy in first telling you to take off your seatbelt and throw caution to the wind, then throws large speed bumps in the road and pops you up out of your seat, cracking your head on the ceiling and leaving you, bewildered, wondering why you put yourself on this crazy ride again and again (this actually happened while I was there, but it also feels like an apt metaphor for the big, sassy country down there I’ve so come to love). You might get where you’re going, eventually and somehow, or end up at another destination entirely. There’s no telling. I’ve never encountered another place that makes it so clear that any sense of control we think we have is an illusion.

When I landed back in New York at the end of the trip, exhausted and feeling terribly isolated, it all melted down. I found myself immediately heaping the blame for the discomfort and fright I had been feeling on the people I loved most. And then, of course, I felt worse.

Brooklyn, upon my arrival, was stupefyingly hot and humid (as she’s wont to be in late July). I don’t take the heat and humidity well (one might be wondering right now– why do you go to Brazil, then? My answer– why do any of us repeatedly put ourselves in challenging situations? I firmly believe we go– albeit unconsciously– seeking the lessons we need to learn again and again until we learn them good and hard). The night after I got home from Brazil, I was walking towards my apartment along Prospect Park after having a beer with a friend when the sky turned a dark, moldy grayish yellow and the undersides of the leaves began to show themselves. Then the rain came pelting down, as though someone had just upturned a bucket over the block. I opened my umbrella, futilely trying to shield my face and my leather purse from the driving water. As I struggled against the tugging gusts, a man walked up beside me, a wide smile spread across his lips. “May as well surrender, don’t you think?” he said, looking at me with water dripping from his eyelashes.

Back home, after I wrung out my dress, I thought about what the man had said. Perhaps he was right, that what I needed to do was just give in and let the storm chew me up and spit me out. Let up on my loved ones a bit and just feel whatever it was that was emerging rather than running myself ragged trying to fight it back.

Then the phone rang. Too soon. Before I had had a chance to let any of those thoughts sink in or declare a truce with myself. And there was conflict, again, staring me square in the face. Before I knew it,  I had blown things up again, the lightning cracking outside my window a mirror to my electric and impulsive reactions, hot and unexpectedly aimed.

A couple days later, I drove north to Western MA to see Trouble. It had been a month, and I had felt so distant from him during my peripatetic travels and his busiest of work months. One final, tempestuous storm raged as I drove northwest through Connecticut. I turned on my brights and set my windshield wipers on their fastest tick-tock and charged on through.

I curled close to Trouble and slept more deeply than I had since I left. I hadn’t realized how badly I just needed touch, familiarity, the woods, and how the absence of all those things had made me feel edgy, had caused me to unleash my careless tongue onto dangerous planes.

I spent my first two days in New England in a sort of relieved haze, exhausted but glad that I didn’t have to hold it all together anymore.

By day three, after an impromptu day-trip to Vermont through golden-hued back country roads and a good sweaty run, I felt that old antsy-ness rising. I felt ready to work, to engage again. After coffee and sending Trouble off to work, I sat down to write. But it didn’t come. I got up, folded laundry, brushed my teeth. Still, nothing. So I pulled on a pair of shoes and went outside, still dressed only in pajamas. By the edge of the driveway, the highbush blueberries caught my eye. The branches were hanging heavy, dark dusty purple orbs low and exposed.  I hadn’t known Trouble had berry bushes when I began dating him, or even when I first took stock of the yard. And though he told me once, I had completely forgotten.

Excited, I hurried back inside, grabbed a container, then set to cleaning the bushes of all their ripe fruit. As my fingers worked, my mind began turning. Thoughts came to rest like feathers that had been caught up in maelstrom, suddenly carried down on a soft, still summer evening. I was pleased with the bounty that had presented itself to me without my asking for it. Fortified by the harvest, I tentatively headed back to take a peek at the vegetable garden.

When spring emerged, I had started on the garden. I had envisioned a perfect square and straight rows, mulched and weed-free and giving forth more vegetables than I could manage in the kitchen. But I had left for Brazil just as the days were heating up and the garden called for my attention, and I felt guilty and disappointed in myself for not having tended the patch more attentively after building the beds, spreading compost, turning soil and sowing seeds with such care. I wanted not to look, ashamed at my abandonment of something I had begun with such vigor and intent. Then I thought of the blueberries and their surprise generosity. 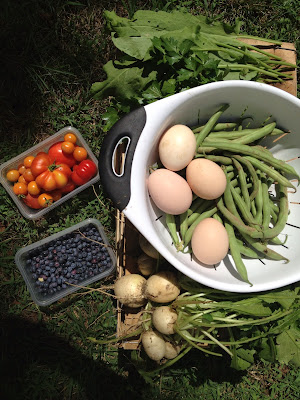 I made my way back through the yard. The small plot (which had never quite become a square, but had been tilled into a rather Texas-shaped thing) was overgrown with weeds. The peas had gone to seed, and a few thick stalks shot up where the sweet tendrils had once climbed. At first I was overwhelmed. Then, as I came nearer, the bright, fire-tip hues of ripe fruit caught my eye.

The tomato plants were lying on the ground (no one ever got around to taming them into vertical submission with twine or cage). I picked several handfuls of sungolds and salvaged a few striated red heirlooms into my t-shirt. Further encouraged, I picked my way gingerly among the weeds to examine the other rows.

There were, too, green beans hanging from their wily stalks. Some lay on the ground, a bit dustier for neglect, but still slender and fully formed. I went back inside for a colander.

I picked all the ready specimens, then saw a good deal of flawless parsley and snipped that too. A row of salad turnips appeared bed-headed, but despite the muss, the white spheres had emerged from the soil. I pulled a few and examined the cracks that had heaved through some of them in their overripe state. Instead of despair, I found myself imagining the bitter greens scrambled with eggs and jars of spicy kimchi. 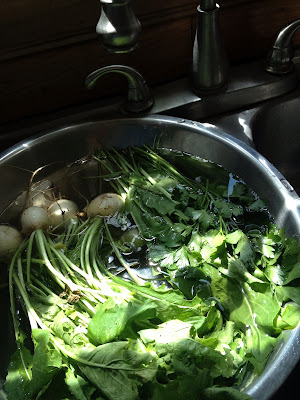 The romaine was all long gone, and many of my herbs hadn’t taken in the clayey, shady patch. But the nasturtiums were big and thriving and the eggplants were getting ready to fruit. I discovered some sorrel, too, which had soldiered through amid a circle of weeds that seemed hellbent on smothering it back. I caught myself laughing out loud as I snipped off a few of the pale, oblong leaves, thinking of sweet pea and sorrel soup.

I brought everything back inside to the cool kitchen and laid the food on the kitchen counter, then went outside to gather the eggs from the coop. I separated the berries from the beans and the tomatoes, then filled a bowl with cold water to revive the greens from the shock of having been harvested. The motions felt fine, familiar and useful, slowly waking me from my July funk.

I wiped the sweat from my forehead, smearing garden dirt across my brow as I went. And then I sat down to write, suddenly full of lucidity. Despite the neglect, my garden had pulled through. Maybe because she knew I needed it. But more likely, because love works like that. You send it outwards in some direction, hoping it’ll come back to you immediately, and in just way you’ve imagined, clean and uncomplicated and endlessly comforting. But it never happens that way. Instead, all the feeling and labor you pour in comes around and opens to you just at the moment when you’ve thrown up your hands. When you finally surrender. To the rain, to the distance, to the heat and weeds of summer. Sure, the beans may be a bit dirtier for wear, and some of the tomatoes, inevitably, will rot on the ground. You may even have to pull back the weeds to find the lemony snap of sorrel, and remember that, at first, she appears to be a weed herself. The reward is in the reassuring surprise that the heart you put in usually waits to come back around to tap you on the shoulder until it sees the window of vulnerability. That is, when you can finally taste the sweet on your tongue. And, as it so often happens, just when you thought it was lost.